Interesting how some of the most creative districts in the world we’re also areas where sex workers we’re working. It might not be good for us all to try to remove this profession.

“Soho has been at the centre of every major global revolution of the last 150 years!”, was my intro to Soho, a long time ago, while working as a London tour guide. The revolutions: communism, television, evolution (a slight stretch on that one!), music, and sex. One might also add comedy. What made this incredibly creative bohemian place? In an interview Irma Kurtz, writer and Cosmo agony aunt for 40 years, said that Bohemia is a place where opposites meet, mix, and share experiences and ideas. And she said that old Soho had this, along with the left bank in Paris, and the East Village in New York. She asked her interviewer where Bohemia is today, and the younger reporter replied “Have you tried looking on the Internet?”!

On a recent trip to Cambodia, a place I lived for awhile, I got a glimpse of the old Soho, and so a brief window into the past. I was at a sex work bar called “Oscars”. This bar is also a music venue, and they have a really good American promoter called “Scotty” who pulls in amazing bands from all over the world. I was there to see an up and coming band from India called the F16’s (Check them out here). Because of the high quality of the music playing, the crowd is a wonderful mix of sex workers and clients, and also a lot of other professionals that would never normally be in a bar such as this come for the music. The atmosphere it creates I don’t think you could find nowadays in any “developed” country in the world. 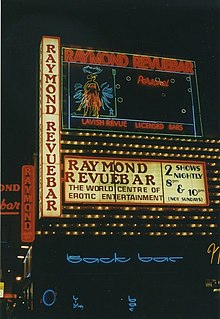 But this is how Soho used to be. Peter Sellers and Tony Hancock got their starts in the 40’s and 50’s at the iconic Windmill Club. And the second major revolution in British comedy took place in the early 80’s at a small theatre above the Raymond Revue Bar. Here the likes of Rick Mayall, Adrian Edmondson, Dawn French and Jennifer Saunders, and Alexi Sale, were all experimenting with a new comedy that would lead to a show called “The Young Ones”, and a permanent change in comedy for ever.

I wonder without this mixing of worlds, without sex workers being seen, are we losing something? Dare I say it, that sex work is a valid profession that is important to the whole system. Maybe when the interviewer commented that Bohemia now only exists on the internet, she was right. And maybe that’s why a lot of the creativity is happening there. Yet even there, with new laws being passed such as SESTA-FOSTA, creative mixing is being challenged.

Social theorist Karl Marx lived in this neighborhood in a rundown tiny smoke filled apartment. It was an edgy part of town then too. About 50 years later inventor John Logie Baird demonstrated the first working television only a few blocks from the Windmill Club. Then later came Bowie, the Stones, and Carnaby Street all pushing new ideas that would go all round the world. It’s all changed now, but I can’t help but find it interesting, that all this was happening in the same district where sex workers were working. And it was the same in Toulouse Lautrec’s  Paris, and the same in New York, where Paul Simon sang about finding “some comfort there”. Sex work has been playing a behind the scenes role in history for a long time.

If you’re ever in Phnom Penh, check out “Oscars” on a Saturday night. Places like these are rare in the world, and often don’t last.

Let Us Know What You Think Cancel reply